Tel-aviv was just recently announced as the vegan capital of the world with the highest amount of vegan restaurants per square meter, so we’d thought of giving you a small review of the best vegan restaurants in Tel-aviv to help you sort out the good places.

Israel’s population is about 8 million and the vegan population estimation is about 3% which is amazingly high, especially when taking under consideration that the vast majority of the vegans are located in Tel-aviv.

Now you can probably understand why this city needs so much Vegan restaurants.

Here is a top 5 Best Vegan restaurants in Tel-aviv , tested and approved by out Vegan editorial team

Vegan coffee shop in Frishman street in the heart of the city just 100 meters from the busy Dizengoff street. Anastasia offers its customers a high variety of Vegan dishes, great grilled tofu sandwich, amazing breakfast and the highlight of the place is the multiple drinking options, the fresh almond milk is a trademark of the place and in addition some great superfood drinks like goji berry, chia, acai, spirulina etc. 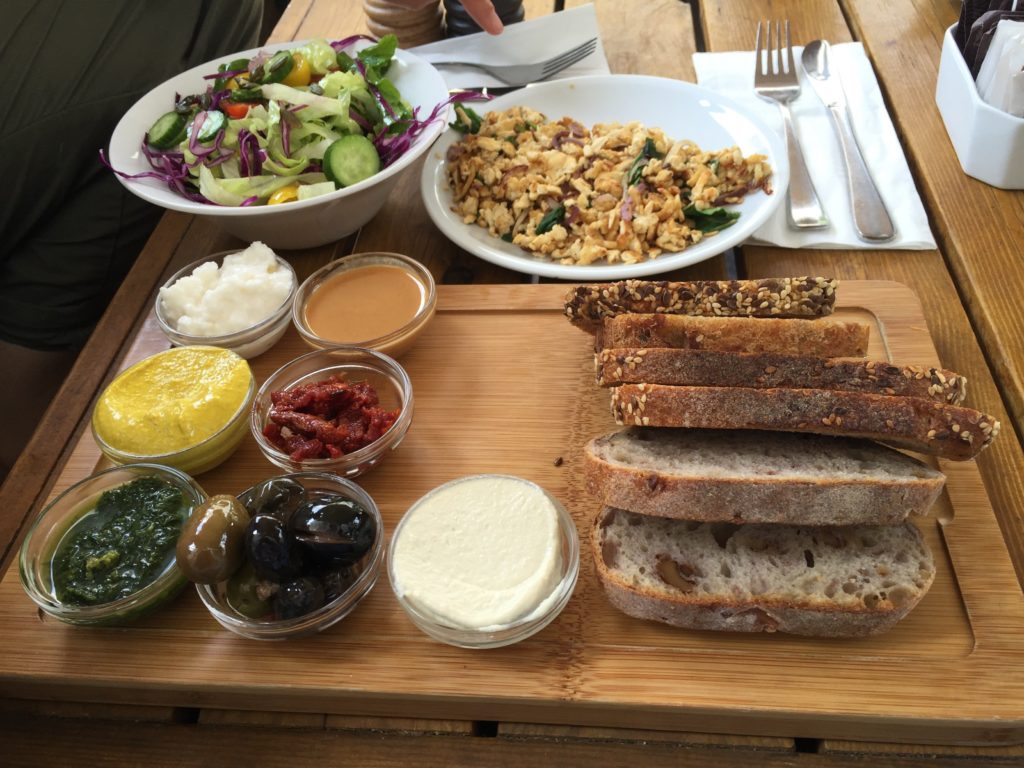 This vegan restaurant is putting the emphasis on fresh ingredients. the variety of dishes is big and the atmosphere and feeling of the food is not compromising its quality just in order to imitate non-vegan food.

One of the best dishes on the Meshek Barzilay menu is the tomato hummus and the vegan shiitake burger, it’s a must and any food lover, vegan or not will find something to eat in this restaurant. 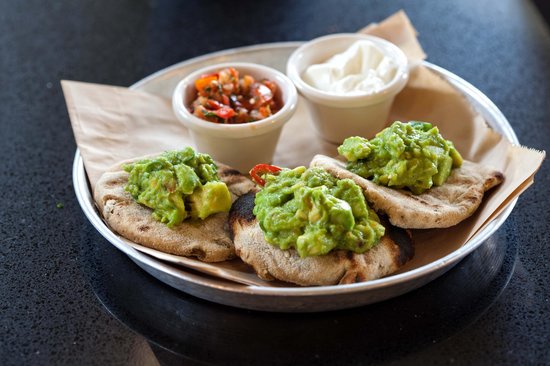 Nanuchka is probably the first Georgian vegan restaurant in the world. The Georgian people are great fans of dairy and meat, so it was a big change that this restaurant turned vegan a few years ago (as the owner became vegan).

You can find some typical Georgian dishes like khinkali and hachapuri on the vegan version adapted in a way that will make you go for seconds.

The place is getting real crowded in the night and the bar is very busy and fun with a great international atmosphere. 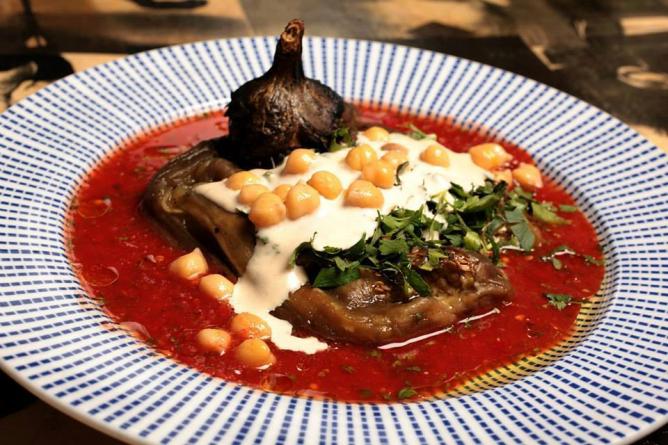 Ecological vegan restaurant opened in 2013 by 4 brothers and sisters of the Zakaim family. They only use organic and seasonal products making the menu super fresh at all times.

Zakaim are proud of not using any plastic in the restaurants packing the takeaway in real dishes that you can return in another time.

The dishes are versatile, pay attention to the msabaha, grilled eggplant in tomato sauce and the hand torn tomatoes. 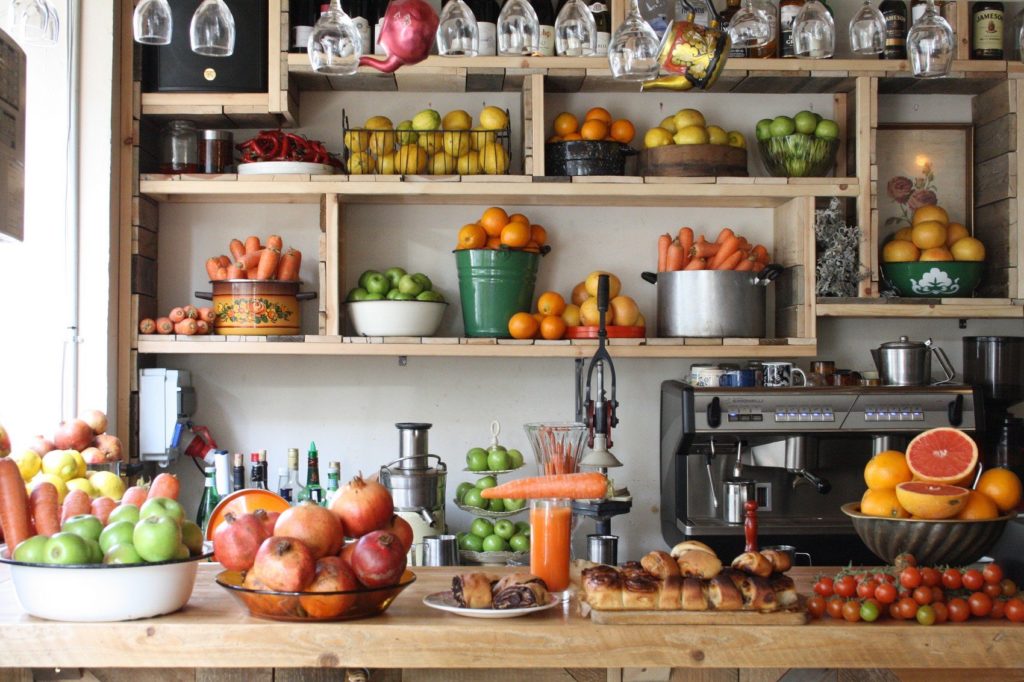 Home of the vegan fast food with dishes like shawarma, schnitzel, burgers , pizza etc. All made out of seitan or tofu usually grilled or on the plancha.

The Vegan Shawarma was founded in 2011 and been a center for vegans from all over tel aviv ever since. 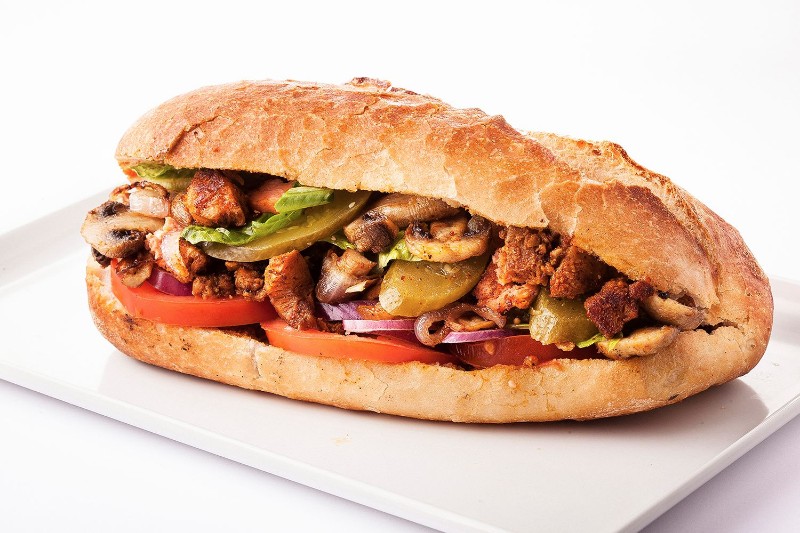 When reviewing the Vegan restaurants in this city we had to choose top 5, there are many more restaurants that could get into this list and sometimes it’s not fair to make this kind of choosing however, in our opinion the above restaurants are above all the rest and worth a visit to any traveler, Vegan or not, it’s just good food, no titles needed.